It doesn’t matter that he’s flying down a winding Moroccan highway on a motorcycle at break-neck speed without a helmet while assassins are buzzing around him trying to kill him.

Exploding cycles falling off the sides of cliffs don’t bug him, nor does the threat of imminent doom if he leans over a centimeter too far one way or the other.

At the end of it all, his hair never really flutters, and that’s all the proof needed to conclude Hollywood’s worst kept secret.

Yes, viewers are drawn to the screen by the increasingly outlandish stunts, wondering just how crazy Cruise is for willingly dangling himself off the side of an Airbus A400 at the start of the film.

But, equally as refreshing is the vintage spy craft that is more prevalent in the 1996 original film or in recent James Bond films starring Daniel Craig. “Rogue Nation” is a near 50-50 blend of the original “Mission Impossible” film and “Ghost Protocol,” which cranked the stunts up to 11 in gorgeously shot locations.

Writer/director Christopher McQuarrie, best known as the writer of the mind-blowing narrative in “The Usual Suspects,” finds exactly the right balance between giving viewers just enough action, with hints of classic spy films and that iconic Tom Cruise grin that has kept viewers on the edges of their seats for decades.

Each action sequence seems to build upon the tension of the last, with the 120-foot free fall into a tank of water without oxygen for up to six minutes standing out among the pitch perfect sequences.

These films will rise and fall with Cruise — who recently announced a sixth installment — and everything about his performance in “Rogue Nation” is vintage Cruise at his peak.

The dry charm, fearlessness in taking on each action sequence himself without a stunt double and even the occasional bravado he brings to the screen remind viewers what they loved about Tom Cruise so much before he started jumping up and down on Oprah’s couch.

Several of the regular sidekicks from “Mission Impossible” films past return in “Rogue Nation,” led by the increasingly essential Simon Pegg, whose wit and humor lightens the mood in scenes and offers a genuine counterbalance to Cruise.

Academy Award-nominee Jeremy Renner, who can hold his own in action movies like “The Bourne Legacy” and Marvel’s “Avengers” films, is criminally underutilized as a field agent torn between helping Cruise’s Ethan Hunt and hunting him down.

Newcomer Rebecca Ferguson, whose role of whose-side-is-she-on assassin is well-written, doesn’t really provide for viewers to grasp onto in a flat, static performance.

It’s a shame that the “Impossible” franchise has yet to figure out how to add a quality role for a female actress. To be sure, several women appear on screen throughout the course of the franchise, but none really rise to the challenge of matching Cruise toe to toe.

Many Bond girls have more gravitas on screen than the underwhelming performances in the franchise offered by Ferguson, Paula Patton and Michelle Monaghan.

The film’s villain, Solomon Lane, is only in focus long enough to give Cruise and Co. another hurdle to overcome on their international adventure from Morocco to Austria and London,

It’s a shame that Sean Harris, the talented actor filling the role, had pivotal scenes left on the cutting room floor.

But “Rogue Nation” is Cruise’s party, and as such, the fifth “Impossible” film certainly supplants “Jurassic World” as the summer’s biggest blockbuster, with Cruise leading the charge in an action-packed thrill ride that doesn’t need gimmicks to keep viewers entertained. 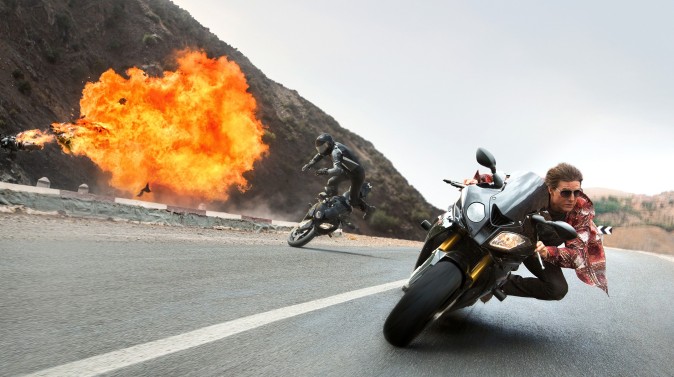